Tōma arrives at the Tokiwadai dorms, where he is reluctantly greeted by Kuroko, who decides to let him wait for Mikoto return. When the Dorm Supervisor comes by for an inspection, Kuroko is forced to hide Tōma under Mikoto’s bed due to his powers negating her teleportation. There, he finds the details concerning the Level 6 Shift project stuffed inside her teddy bear, learning that Misaka 10032’s experiment is next. Tōma follows a trail of windmills to a bridge where he eventually finds Mikoto and confronts her about the experiments. With all her other efforts failed, Mikoto feels convinced that the only way to stop the experiments now is to prove she doesn’t live up to Tree Diagram’s expectations of her power by letting herself be killed by Accelerator in a single move. However, Tōma, feeling her way won’t save anyone, decides to stand in her way, refusing to fight back or even defend himself from Mikoto’s lightning. 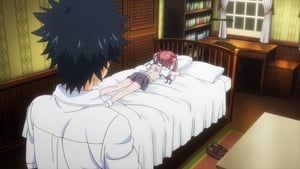 Jul. 12, 2013
Disclaimer: This site does not store any files on its servers. All the content is provided by non-affiliated third parties. HAVE A NICE DAY