Despite the injuries he received from Mikoto, Tōma goes off at full speed and arrives at the site where Accelerator and Misaka 10032 are fighting. Tōma states his firm desire to rescue Misaka 10032, saying that even if she is a clone, there’s only one of her in the world. As their fight begins, Tōma intially struggles against Accelerator as he launches projectiles at him and sets off a dust explosion. However, Accelerator is shocked when Tōma is able to punch him with his right hand, also coming as a surprise to Mikoto, who had also rushed to the scene. Angered, Accelerator starts using his ability to manipulate the wind, creating a huge hurricane that deals a lot of damage to Tōma. Mikoto attempts to go with her original plan in order to save Tōma, only to realise it would be futile upon witnessing Accelerator using his power to create a large ball of plasma that would wipe out everything in the area. 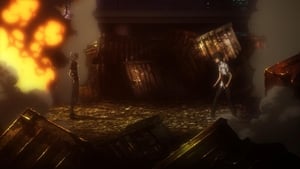 Jul. 19, 2013
Disclaimer: This site does not store any files on its servers. All the content is provided by non-affiliated third parties. HAVE A NICE DAY