A curious organisation oversees ITEM as they fight against a group of mechs. The next day, Mikoto and the gang visit Banri, who is due to be discharged from hospital soon and will be moving into an apartment with Erii, who will be moving out of Kazari’s apartment as a result. Meanwhile, Mitsuko uses her power to stop a purse thief, but her victory is short-lived when a curious man berates her for her actions. As the group get together to celebrate Banri’s dischargement, Kuroko and Kazari are called off for Judgment duties when the traffic signals suddenly go out. After finishing her duties, Kazari gives a box of taiyaki to Erii, and the two have a tearful farewell as roommates. As the group take a detour home, they come across a curious white-haired girl named Febri, who appears to know Mikoto. 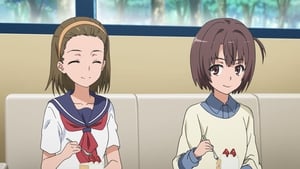 Aug. 16, 2013
Disclaimer: This site does not store any files on its servers. All the content is provided by non-affiliated third parties. HAVE A NICE DAY