Heaven Canceler goes on to explain to Mikoto that Febri’s body is poisoned, requiring her to suck special lollipops to keep herself alive, leaving her angry that another dark organization is performing twisted experiments. Whilst keeping this a secret from the others, Mikoto runs into Misaka 10032, who tells her that Febri had been wanting to meet her own big sister, also believing Febri to have a link to Testament, leading Mikoto to believe Shinobu is involved. After receiving a call from Mitsuko about the importance of friendship, Mikoto realises she shouldn’t have to do this alone and decides to inform Kuroko and the others about Febri’s condition, becoming surprised and relieved to find them more than willing to help. Upon analysing a strange object that Yomikawa found in the mech suit, which is revealed by Heaven Canceler deduces it to be a strand of hair similar to Febri’s, possibly belonging to her sister, before revealing to Mikoto that Febri’s life may be coming to an end. 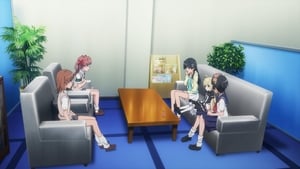 Aug. 30, 2013
Disclaimer: This site does not store any files on its servers. All the content is provided by non-affiliated third parties. HAVE A NICE DAY