With only two facilities remaining, the higher ups behind the Level 6 Shift project call upon the services of the underground group, ITEM. As Mikoto infiltrates one of these facilities, she finds herself against one of its members, Frenda Seivelun, who causes trouble for her using flammable tape and stuffed toys containing bombs. Meanwhile, Shinobu arrives at the other remaining facility, where they are attempting to transport the data whilst the other facility is being attacked. Mikoto chases down Frenda who, after a series of failed attacks, fills the room up with nitrogen, bluffing that it is an explosive gas, preventing Mikoto from using her electricity and putting her at a huge disadvantage. However, Mikoto, refusing to simply give up and be killed, manages to fight back against Frenda, leading to her bluff becoming exposed and a prompt electrical payback. 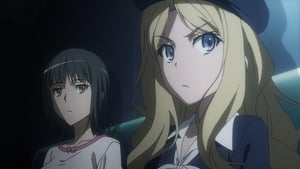 May. 31, 2013
Disclaimer: This site does not store any files on its servers. All the content is provided by non-affiliated third parties. HAVE A NICE DAY