Mikoto attempts to escape from Shizuri’s attacks, which proves difficult due to ITEM’s third member, Rikō Takitsubo, using her AIM Stalker ability to help Shizuri and Frenda home their attacks on her position. Meanwhile, Shinobu, who felt Mikoto shouldn’t have to carry her burden alone, sneaks into the basement of her facility where the incubated Sisters are being held. There, she intends to install emotions into all of the remaining Sisters via the Misaka Network in the hopes it may move the organizers to suspend the experiments. However, she is apprehended by ITEM’s fourth member, Saiai Kinuhata, who was guarding the facility in case a second party was involved in the attacks. Shinobu somehow manages to get the program installing, but it is suddenly blocked by an unforeseen error code, labelled “Breach code no. 20001”. She attempts to use violence to save herself, but her attack proves futile against Saiai’s Offense Armor ability and she is taken into custody. 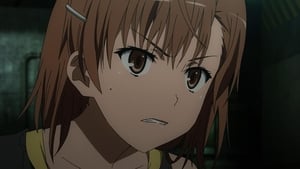 Jun. 07, 2013
Disclaimer: This site does not store any files on its servers. All the content is provided by non-affiliated third parties. HAVE A NICE DAY