A girl named Panini has a crush on Chowder, and he attempts to convince her that he isn’t her boyfriend. But Chowder finds himself in a dilemma when Gazpacho tells him that he must marry Panini, since she has kissed him and needs to make an “honest woman” out of her. 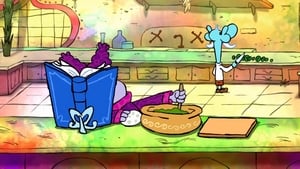 Nov. 16, 2007
Disclaimer: This site does not store any files on its servers. All the content is provided by non-affiliated third parties. HAVE A NICE DAY