Nagisa admits to wanting to restart the drama club, and Tomoya helps Nagisa to create advertisement posters which they place around school. At school that day, Tomoya meets two other girls: a strange genius named Kotomi Ichinose, and a first-year named Fuko Ibuki. Later that day, Nagisa finds out Tomoya used to play basketball, and invites him to play a game the next day. However, it is later revealed that his father injured Tomoya’s arm in a fight; as a result, he is unable to play basketball anymore. 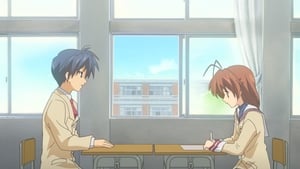 Oct. 12, 2007
Disclaimer: This site does not store any files on its servers. All the content is provided by non-affiliated third parties. HAVE A NICE DAY