A Farewell to the End of Summer

Summer vacation is now over and the second semester has started at Tomoya’s school. Nagisa’s father Akio asks Tomoya to form a baseball team for a local game against the neighboring shopping district team. Tomoya is able to recruit Kyou and Kotomi from the drama club, Youhei and his younger sister Mei, Tomoyo, Misae, and Yusuke. Tomoya’s team manages to get an early lead, but Akio’s leg gets injured by a flying bat, and Nagisa fills in for her father as the pitcher. The other team catches up near the end, and it comes down to the final inning when Tomoya scores an RBI, winning the game. 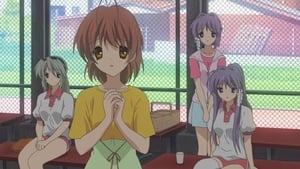 Oct. 03, 2008
Disclaimer: This site does not store any files on its servers. All the content is provided by non-affiliated third parties. HAVE A NICE DAY