In Search of False Love

Mei has become worried about her older brother since he still does not have a plan after high school, and comes to stay at Nagisa’s for the time being. Based on a fleeting comment by Youhei, Tomoya gets the idea to ask a girl to pose as his girlfriend so Mei will stop worrying about him. Youhei goes around with Tomoya and Nagisa asking Ryou, Tomoyo, Kotomi, and Yukine, but no one can help him. Sanae overhears Youhei’s trouble and decides to be his fake girlfriend if it will help push him in the right direction in life. Youhei, however, still believes her to be Nagisa’s older sister. When Mei meets her brother’s “girlfriend”, Sanae is posing as a student from Tomoya’s high school. 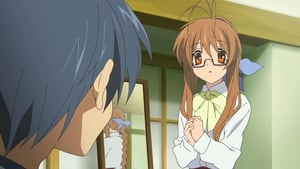 Oct. 10, 2008
Disclaimer: This site does not store any files on its servers. All the content is provided by non-affiliated third parties. HAVE A NICE DAY