In a flashback, Mikoto surrenders to Reisi rather than fight him. As Reisi interrogates Mikoto, he wonders why the Red King has yet to choose his successor. Meanwhile Shiro asks Kuroh who were the people with powers chasing him and the “Kings”. Kuroh reveals Japan is secretly being ruled by seven psychic clans called the Seven clans of Color, each ruled by a King. Unlike the Red Clan Homura and Blue Clan Scepter 4, whose clans posses the power of fire and ice respectively, his late master’s clan, the Colorless Clan, have the power of premonition. Before his master, Ichigen Miwa passed away, he had a vision that his successor, Shiro, might become evil, which Kuroh is tasked to kill him if there is proof. Shiro convinces Kuroh the video released by Homura might be a fake and he shouldn’t use that to quickly judge him that he is evil without knowing him first. Kuroh agrees to stop attacking him and get know to Shiro but if he ever turns evil, he will kill him. 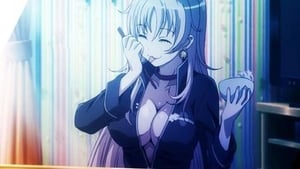 Oct. 19, 2012
Disclaimer: This site does not store any files on its servers. All the content is provided by non-affiliated third parties. HAVE A NICE DAY