Shiro, Neko and Kuroh heads to the city to buy more fireworks for the festival. Meanwhile Seri and Saruhiko arrives at Ashinaka and orders the principal to give them all their information on Shiro, unaware he had just left. While Saruhiko illegally access the student council’s computer to find Shiro in the student database, Misaki and Rikio asks the students for information about Shiro but due to their looks and Misaki’s temper, they only scared them. Saruhiko soon encounters Misaki and Rikio, where he mocks and insults his former friends which angers Misaki to fight him. The fight is soon stopped by Seri who orders Saruhiko to returned to Scepter 4 as neither the school or it’s database has a record of Shiro being a student at Ashinaka. When Misaki asks a female student about Shiro before leaving, the student, Kukuri tells him she has no idea who Shiro is. 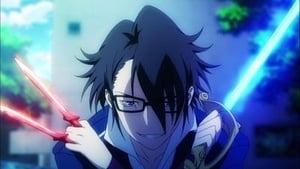 Nov. 02, 2012
Disclaimer: This site does not store any files on its servers. All the content is provided by non-affiliated third parties. HAVE A NICE DAY