Scepter 4 has finally tracked down Shiro as they prepare to arrest him. Neko creates an illusion in order for Shiro to escape, but is easily thwarted by Reisi who reveals that she has the power to manipulate people’s minds by giving them false memories. While Kuro fights Reisi, Neko escapes with Shiro. When Kuro is nearly defeated, Shiro appears and reveals his true identity to them as the new Colorless King, using his power to let him, Kuro, and Neko escape. After they get away, Shiro convinces Neko to undo the amnesia spell on him to find out the truth. 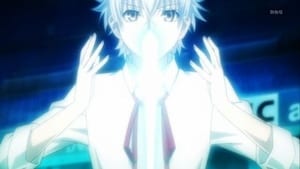 Nov. 16, 2012
Disclaimer: This site does not store any files on its servers. All the content is provided by non-affiliated third parties. HAVE A NICE DAY