After defeating Yōsen High, Seirin is interviewed for Basketball Monthly. After the interview Kagami heads outside to visit with his old friend, Tatsuya Himuro, and Alex, but instead of being able to resolve their differences he runs into one Shōgo Haizaki of Fukuda Sōgō Academy. He is trying to flirt with Alex, making Kagami mad, but before Kagami can act Kise arrives on the scene and reveals that Haizaki was a starter on the Generation of Miracles team before he arrived. Kagami heads back in to ask Kuroko about this news only to find out the final quarterfinal will feature a showdown between Kise and Haizaki, with the winner moving on to face Seirin in the semifinals. 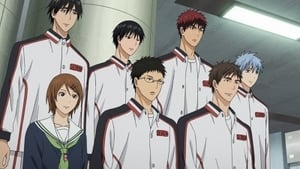 Jan. 10, 2015
Disclaimer: This site does not store any files on its servers. All the content is provided by non-affiliated third parties. HAVE A NICE DAY