Mickey and the gang build a train, so they can carry the professor’s non-melting snow to the Clubhouse. Note 1: In addition to their two songs (the “Mickey Mouse Clubhouse” theme song and “Hot Dog!”), They Might Be Giants are also heard during the closing credits with a song specially written for this episode (“Choo-Choo Express”). Note 2: This episode even marks the first (and so far, only) time that the Mouskadoer dispenses two sets of Mousekatools. Note 3: In the UK, the episode was titled as Mickey’s Clubhouse Choo Choo in December 2009, the UK airing of the episode was renamed again Choo-Choo Express. Note 4: This episode was dedicated “in loving memory” to Wayne Allwine, who had voiced Mickey Mouse since 1977, as he passed away on May 18, 2009 of complications caused by diabetes. Guests – Ludwig von Drake, Clarabelle Cow, Bella, Chip ‘n Dale, Pete, Santa Claus and Mrs. Claus 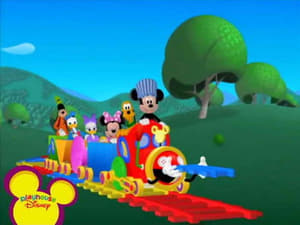 Oct. 25, 2009
Disclaimer: This site does not store any files on its servers. All the content is provided by non-affiliated third parties. HAVE A NICE DAY