Akira has a dream where he got to squeeze Mikoto’s breast and can’t get the sensation out of his head. Taking a stroll, he decides to go in the direction Mikoto usually takes after school and comes up to an apartment block, which turns out to be where Mikoto lives. Mikoto invites Akira into her apartment for tea, where his imagination starts to get the better of him. After catching Mikoto as she trips after being spooked by some lightning, Akira almost reaches for her breast but Mikoto stops him. After getting Akira to tell her about his dream, she feeds him some drool whilst grabbing her own breast, giving him a stronger sense of the feeling. She then allows Akira the opportunity to touch them for himself, which causes Akira to become more aggressive and tease her ears until she notices Mikoto is crying and runs off. The next day, after Mikoto gets some advice from Ayuko about the new experiences she is feeling, Akira asks Mikoto to slap him as a way of apology. Afterwards, Mikoto explains the feeling she gets when her ear is touched before taking on Akira’s bruise herself. 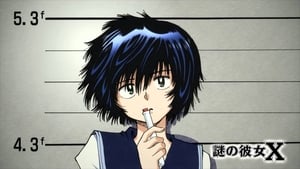 May. 27, 2012
Disclaimer: This site does not store any files on its servers. All the content is provided by non-affiliated third parties. HAVE A NICE DAY