Pretty Boy and a Vampire

A new transfer student called Ijuuin Kotaro attends Youkai Academy. By muttering the words “Je t’aime”, which is French for “I like you”, he can control anyone who hears him mutter those words as he wish. Meanwhile, Kokoa is looking for her pet bat, Komori, who has disappeared. Kotaro eventually manages to hypnotize the entire female population (except Kokoa) and even Gin. Kokoa eventually deduces that Koutaro is really Komori in disguise, when he accidentally calls her “Kokoa-sama” and adds “dechu” at the end of his sentence. Tsukune eventually removes Moka’s rosario and the Inner Moka defeats the student with Kokoa’s help. Koumori returns to his original bat form, and one of his teeth falls off and releases some kind of dark spirit. At the end, Kokoa thanks her “Onee-sama” for saving, but Inner Moka told Kokoa to thank the other Moka for trying to save her, even if she was still under the spell. Kokoa still thinks the Outer Moka isn’t her real “Onee-sama”. 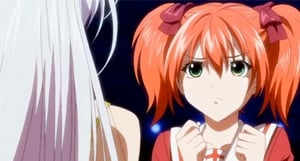 Dec. 04, 2008
Disclaimer: This site does not store any files on its servers. All the content is provided by non-affiliated third parties. HAVE A NICE DAY