Sparkle my Heart! The Power of Song!

Amu takes Rikka and Hikaru to an Utau concert and takes them backstage to let them meet her. Rikka becomes embarrassed and tells her when she hears her songs, she feels re-energized. Amu tells Utau that she wishes Ikuto could’ve come, but Utau tells her that he is traveling the world to find their father. The concert begins, and Rikka discovers one of the X Eggs have followed her. She tells Amu and Hikaru that she forgot something at home and runs off. It turns out that the X Egg loves Utau’s songs. Diamond senses an X Egg nearby, and Amu transforms into Amulet Spade. Rikka tries to calm the X Egg down, but Hikaru tells her that she can’t help and to just let Amu handle it. Amu uses Prism Music and tells the X Egg to listen to Utau’s song. Amu tells the egg that Utau struggled a lot to get where she is now. The X Egg settles and Amu purifies it. They go back to watch the concert, and Utau says that she’ll always keep singing no matter what. When the concert is over, the former Easter employees come to pick Hikaru up. Hikaru tells Rikka that she is fascinating and that he has never had someone like her in his life. He leaves, making Rikka angry, wondering how she is fascinating. 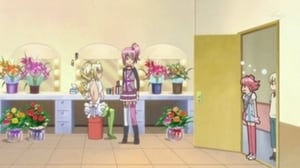 Oct. 17, 2009
Disclaimer: This site does not store any files on its servers. All the content is provided by non-affiliated third parties. HAVE A NICE DAY