Hikaru and Rikka are helping Yaya take care of the flower beds. Yaya is working hard to take care of the flowers, along with Hikaru and Rikka. Amu and her guardian characters notice and say it’s a little out of character for her. Yaya notices them watching and tells them to come help. Later the next day, Rikka is taking care of the flowers by herself, not knowing Yaya had to stay after class. Suddenly, a X Egg emerges from behind some flowers. Rikka wonders where it came from, but then asks if it wanted to help her out since she was getting lonely. Meanwhile, Yaya is hurrying to the flower beds, with Amu following her. When they arrive, the X Egg has made the flowers huge. Amu and Yaya transform into Amulet Clover and Dear Baby. The X Egg begins doing a trick, trying to surprise them. Amu asks Rikka what the egg is saying, and Rikka tells her that it wanted to become a magician, but it could never impress anybody. It does another trick, messing up the flower beds, and Rikka is impressed. She says that it could become a magician, but Hikaru says that the trick was boring. Amu agrees, saying that it will only cause people problems if it goes on like that. She says it is bound to come up with some good ideas and finally purifies it. The flowers are still messed up. Rikka apologizes, saying that it’s all her fault, but Miki tells her to leave it to Amu. Amu uses Remake Honey to give life back to the flowers, amazing Rikka. Amu tells her to do her best to take care of the flowers tomorrow. Meanwhile, Remake Honey seemed to have turned Yaya back to her old spoiled self, causing her to throw a fit on the ground and tell them to take care of her. 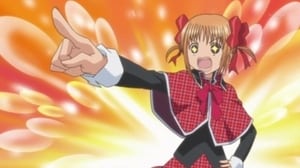 Oct. 31, 2009
Disclaimer: This site does not store any files on its servers. All the content is provided by non-affiliated third parties. HAVE A NICE DAY