The battle between Death Gun and Kirito begins as the former unleashes a deadly barrage of strikes that greatly weakens Kirito. While they are fighting, Kirito has a flashback to the meeting before the Laughing Coffin raid in Sword Art Online, recalling a strikingly similar player with the same red eyes as Death Gun. Kirito deduces that Death Gun is really the infamous, “Red Eyed,” Xaxa, the second in command of Laughing Coffin. As Xaxa goes for the final blow, Sinon creates the illusion of a direction line using her experience in the game alone, causing Xaxa to cloak to avoid it. However, Kirito pulls out his sidearm and fires it at Xaxa, stopping the cloaking process and rendering him vulnerable. Using the willpower and strength he possessed in Sword Art Online, Kirito defeats Xaxa, cutting in clean in half. Before he dies, Xaxa reassures Kirito that their battle is not over. Sinon and Kirito then come to an agreement to end the Bullet of Bullets by committing double in-game suicide using a grenade, crowning them both the winner, but not before they reveal to each other their real names. After logging out, Shino is visited by Shinkawa, who, after making romantic advances on her, pulls out a syringe and reveals himself to be the second person involved in the Death Gun murders, which Kirito and Sinon earlier deduced while in the cave. Shinkawa tries to rape Shino, but she is able to get away, only to have Shinkawa pull her back. As this is happening, Kazuto bursts through Shino’s door and attacks Shinkawa, holding him off while telling Shino, who recognizes Kazuto as Kirito, to run. 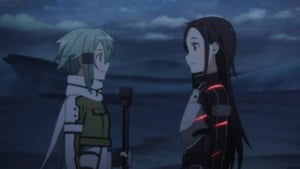 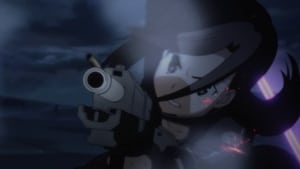 Sep. 27, 2014
Disclaimer: This site does not store any files on its servers. All the content is provided by non-affiliated third parties. HAVE A NICE DAY