While Kirigaya Kazuto tried to defend himself against Shinkawa Kyouji, he leaves an opening for Kyouji to attempt to inject him with succinylcholine. Instead of running away, Asada Shino returns inside and knocks Kyouji out with a stereo. Shino then checks on Kazuto’s condition, but found out that there is an electrode stuck at the part of his chest where Kyouji had attempted to inject him with the drug which protects him against the needless syringe. Several days later, Endou calls out to Shino, who again tried to demand money from her. As Shino refuses the demand, Endou took out a model gun and threatens Shino. However, after Endou unsuccessfully attempts to fire with it, Shino took the gun from Endou, shows her that the safeties needed to be disabled to fire and then shoots a can with it before returning it back to Endou. As Shino was about to leave the school grounds, she saw that Kazuto was waiting for her near the entrance and drawing unwanted attention. Kazuto first drives Shino to a cafe to meet with Kikuoka Seijirou about the Death Gun incident. After that, Kazuto takes Shino to the Dicey Cafe, where he introduces her to Yuuki Asuna and Shinozaki Rika (Lisbeth). Kazuto then reveals that he had told the two girls about Shino’s past and explains that he had them help him find a certain person that she should meet. The person is revealed to have been a woman, named Oosawa Sachie, who was the post office worker, threatened by the robber that Shino killed. The woman thanks Shino for saving her life and tells her that she was pregnant at the time, so Shino had also saved the life of her daughter, Mizue. Kazuto then explains that he wants Shino to think about the people that she had saved by killing the robber and thus be able to forgive herself for it. 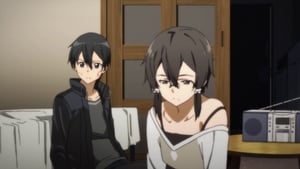 Oct. 04, 2014
Disclaimer: This site does not store any files on its servers. All the content is provided by non-affiliated third parties. HAVE A NICE DAY