The King of the Giants

At the entrance to Thrymheim, Yui explains that the quest they were given was created by the Cardinal System’s Automatic Quest Generation Function and that if they did not succeed in their quest, a final war event, Ragnarok, would be triggered. Sometime later, at the end of the second floor of Thrymheimr, the group encounters two minotaurs, and they are forced to rely on Sword Skills that could deal elemental damage to them in addition to physical damage, but also leave the player rigid for a few seconds after the skill is used up. With Kirito revealing his new technique of using consecutive Sword Skills with each of his swords to avoid the period of rigidity, they are able to defeat the two minotaurs. Later, after defeating the boss guarding the entrance to the lowest floor of the castle, they encounter an NPC woman trapped in an ice cage along the way. Although the others insist that it is a trap and plan to avoid her, Klein ignores their advice and frees the woman, who was revealed to be Freyja. Instead of running away, Freyja asks to join the group and Kirito reluctantly agrees to the request. After preparing for the final battle by recharging their buffs, the group enters the throne room, where they met the king of the frost giants, Thrym. 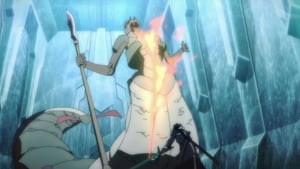 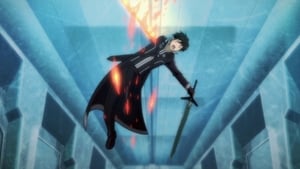 Oct. 25, 2014
Disclaimer: This site does not store any files on its servers. All the content is provided by non-affiliated third parties. HAVE A NICE DAY