The Monument of Swordsmen

After Kirito blocked the raiding guild’s reinforcements, three mages of guild fired multiple magical projectiles at him. However, he used «Deadly Sins» to break all seven projectiles. As the reinforcements got into formation for battle, Kirito told Asuna that he would hold them off for three minutes with the help of Klein. In the meantime, the Sleeping Knights engaged the guild’s forces blocking the path to the boss room. But, seeing that their assault was rendered useless by the intervention of the guild’s healers, Asuna asked Siune to manage the healing herself and used «Flashing Penetrator» to break through to the healers, while killing the group’s leader. After the healers were disposed of, the remained of the players were easily defeated, allowing Asuna and the others to enter the boss room. During the boss battle, Talken’s spear was thrown into the air by the boss and it accidentally hit a crystal where the boss’s two heads connected. Seeing that this caused the boss to assume a guard stance, Asuna deduced that it might be its weak point and tested it out by firing several ice pillars at the same spot. Confirming her deduction, Asuna left the healing to Siune to tell Yuuki to use a Sword Skill at the weak spot. Following Asuna’s suggestion to use Tecchi as a stepping stone, Yuuki defeated the boss with her signature Original Sword Skill. After the battle, the group agreed to celebrate at Asuna’s player home. While conversing about various things, Asuna asked whether she could join the Sleeping Knights, but, seeing that it resulted in an unpleasant reaction, she decided to change the topic and reminded everyone about the Monument of Swordsmen. At the monument, everyone took a picture and Yuuki accidentally called Asuna as her elder sister. Since she had also done the same in the boss room, Asuna pointed this out to Yuuki. Unexpectedly, Yuuki started crying and abruptly logged off. 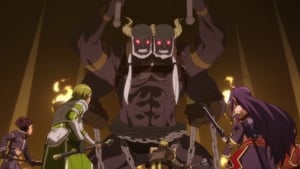 Nov. 29, 2014
Disclaimer: This site does not store any files on its servers. All the content is provided by non-affiliated third parties. HAVE A NICE DAY