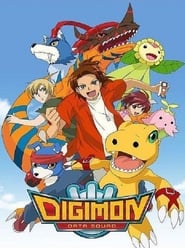 The Digital Accident Tactics Squad (DATS) is a government organization that consists members for the team, including Marcus Damon, Agumon, Thomas H. Norstein, Gaomon, Yoshino “Yoshi” Fujieda, Lalamon, Keenan Crier and Falcomon. The organization sends any Digimon back to the Digital World. Marcus learns that Merukimon is opposing mankind. However, the past is revealed that scientist Akihiro Kurata was responsible for invading the Digital World. Kurata gained the support of the government about opposing all Digimon species, claiming they were a threat to mankind. Kurata frees and awakens Belphemon, one of the Seven Great Demon Lords. When he merges with him, Marcus defeats them. Before dying, Kurata uses a bomb to make the Digital World merging with the human world. While BanchoLeomon prevents the collision, he asks Marcus to stop King Drasil (Yggdrasil), the supreme ruler who attempts to protect the Digital World by destroying mankind, since they cannot exist in both dimensions. Marcus realizes that his father, Spencer, was trapped in the Digital World for ten years, because Drasil possessed Spencer’s body and BanchoLeomon kept the latter’s soul. After Marcus destroys Drasil, Spencer’s soul returns to his body. With both worlds restored, all Digimon partners return to their own world. Five years later, Marcus and his friends embrace their future.